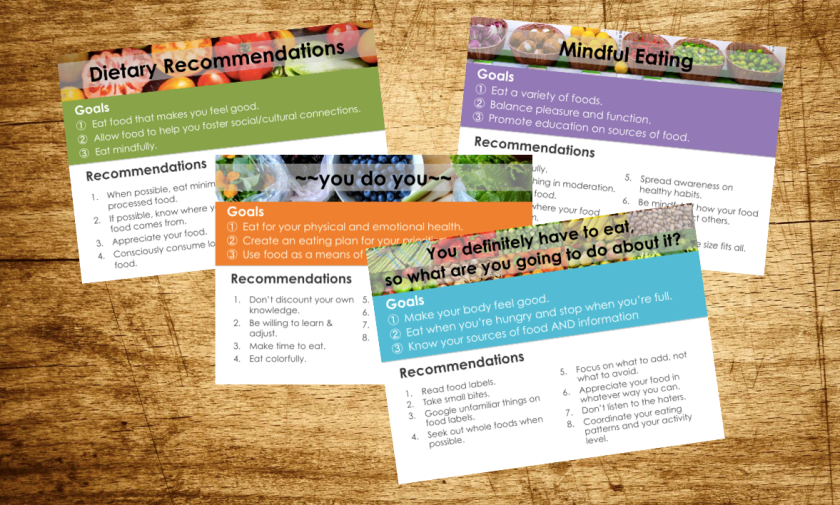 For the past two weeks, my students in Food in American Society and Culture at Brown University have been diving into critical nutrition studies, an emerging field that approaches nutrition science as a cultural construct, a product of history, and inextricably linked to notions of morality. I wondered how students might view food advice differently after learning the basics of this field of thought. Beyond that, how might they reimagine dietary guidelines?

Critical nutrition studies questions the assumptions that form the empirical truth and presumed objective authority of science, as well as the connections between science and food, the body, and human health. To varying degrees, critical nutrition scholars examine, critique, and reject the primary role of nutrition science in how eaters (and stages throughout food systems) relate to food and eating. They endorse moves to decenter nutrition and destabilize its hierarchical position within food knowledge production. This creates space for aspects like food production quality, degree of processing, and truth in marketing, as well as heritage, tradition, culture, identities, gastronomy, taste, and pleasure—to name but a few. [For a far more complete definition of critical nutrition studies, read Charlotte Biltekoff’s “Critical Nutrition Studies” in the The Oxford Handbook of Food History, published by Oxford University Press in 2012.]

In my work, I’ve taken a rather unexpected path toward critical nutrition studies. As an undergraduate, I studied the liberal arts, but also took the prerequisites to become a registered dietitian. I ended up studying Public Health Nutrition, and as I completed my graduate course work, I taught Introduction to Nutrition six times as a Graduate Student Instructor, believing myself—and quite literally indoctrinating hundreds and hundreds of students—in a perspective that I now readily question, unpack, and deconstruct. It was in my years working in worksite wellness that I began to seriously question whether we in public health should be telling people what to eat at all. Finally, pursuing an MLA in Gastronomy, hearing a roundtable discussion on critical nutrition studies at the 2012 ASFS conference, and attending the Critical Nutrition Symposium at UC Santa Cruz in 2013 each drew me into a critical nutrition studies perspective.

Furthermore, my current research not only engages food studies and critical nutrition studies, but also how they both intersect, inform, and contradict another emerging field—the history of nutrition science, a fascinating subfield of the history of medicine, that grapples with the histories of this “young” science. [If you’re interested in these histories too, join our new H-Nutrition network.]

Learning with My Students

As is often the case, working through these difficult concepts and questions with my students has been wholly satisfying. Over the course of two weeks, we read selections from several influential critical nutrition studies texts:

We were very lucky to have Charlotte Biltekoff in class with us to answer questions about her work. Using her comments and these texts, we also critically read primary sources offering dietary advice:

Students also contributed their own primary sources that answered the prompt:

Many sources within our foodscape tell us what we should eat—and as we’ve discussed through the aphorism “You are what you eat,” in effect tell us who we ought to be as well. Find an example of a source offering dietary advice and analyze it in 100-250 words, using Charlotte Biltekoff’s Eating Right in America as a point of reference. Consider: What dietary advice does your source offer? What and/or how does it say we should eat? How does the dietary advice and its author establish authority and expertise?

Next, students accepted the challenge of designing dietary guidelines, informed by critical nutrition studies and aiming to make their dietary advice as inclusive, factual, and balanced as possible. Admittedly, this required accepting a set of assumptions, including the idea that we should tell people what to eat and that guidelines are a worthwhile tool, even if they can be moralizing and paternalistic. It was an experiment. We might fail, but we were going to try it out.

In groups of three or four, students titled their guides, set dietary goals, and drafted a set of recommendations, using a PowerPoint template I designed, so all design flaws and shortsightedness are mine.

Here’s what they came up with, shared with their permission: 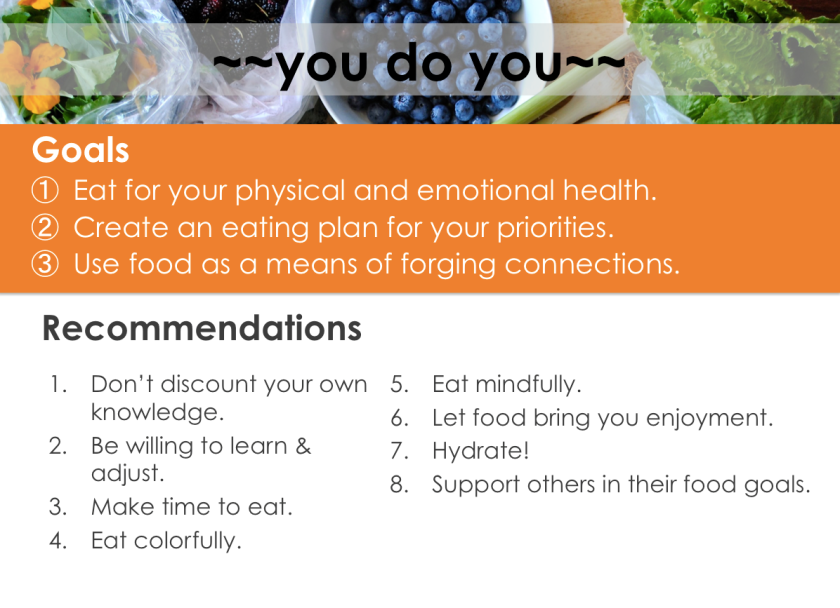 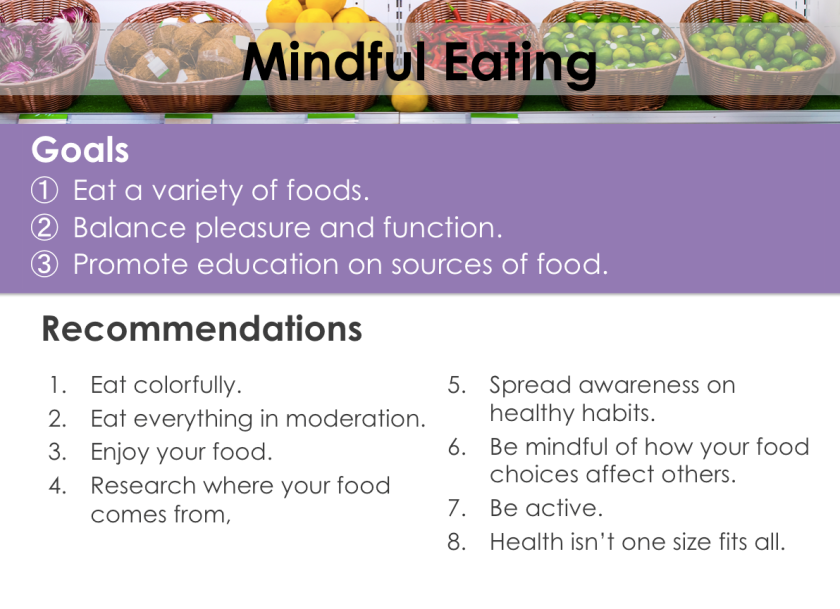 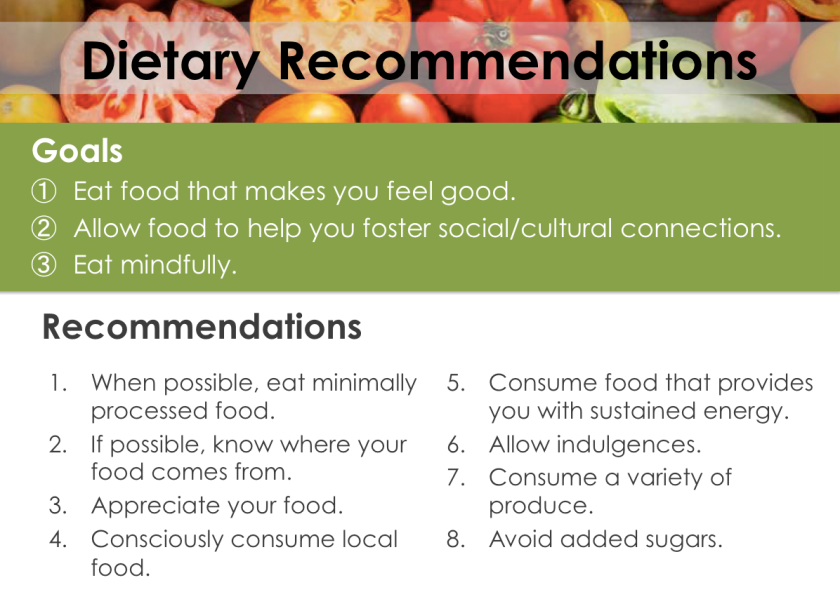 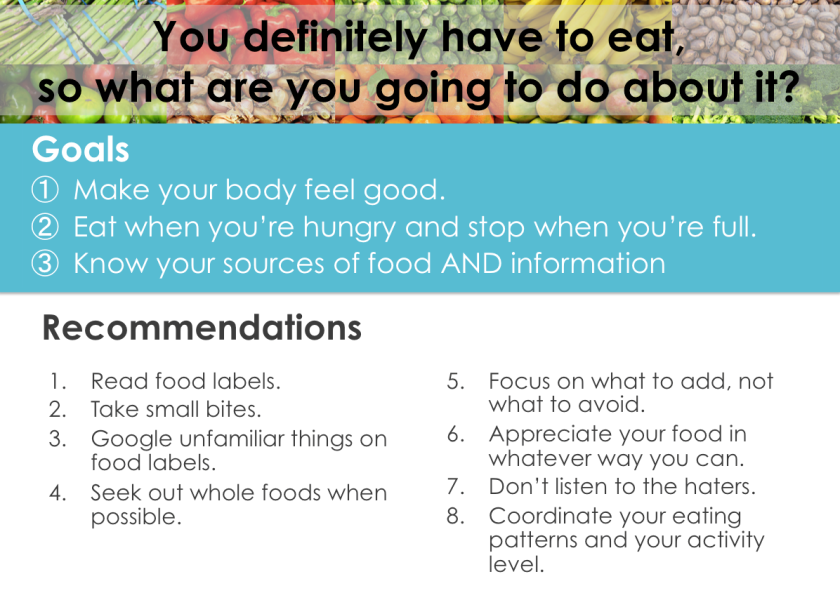 As a class, we noted common themes that each set of guidelines endorsed and areas where they diverged, as well as the challenges inherent to designing guidelines in the first place:

Students cared deeply about the challenge of making population level dietary guidelines that still made space for individuals: personal identities; ways of eating; bodies of various shapes, sizes, and abilities; levels of access and capital; and senses of self. They thought it was important for individuals to consider dietary information, but to make it meaningful to their own selves and circumstances, emphasizing themes of education, adjustment, and customization. Students cared about listening to one’s own body and learning what felt good on an individual level without judgement. At the same time, students struggled to create recommendations that were specific enough to be clear and meaningful without being exclusionary in at least some way. Furthermore, students acknowledged that writing pithy and concise goals and recommendations is a difficult task. In the end, many students felt like their recommendations ended up too vague to create an impact, developing a newfound respect for nutrition communication.

Most groups endorsed the idea that food was a source of enjoyment, pleasure, and social connection, aspects worth emphasizing just as much as variety and portion control. At the same time, they struggled with identifying language that wasn’t moralizing. For example, even the recommendation, “Allow indulgences,” grew complicated. Students intended for it to endorse moderation in a positive way, but the very word indulgence incited debate, as it invoked a framework of good/bad and even redemption/sin that we didn’t want to support, but, at the same time, struggled to leave behind entirely.

Students cared about what is in food, as well as where food comes from and about easily accessible and understandable information about food production and provenance. Charlotte Biltekoff’s message of “dietary literacy” resonated with them deeply—as did her clear claim that dietary advice embodies social ideals and by its very nature marginalizes and creates “unhealthy others.” More than anything else, students wanted their dietary guidelines to limit not certain foods or nutrients, but to limit paternalistic judgement and the moralization of foods, eaters, and bodies.

In the end, we might have ended up exactly where Charlotte Biltekoff in Eating Right in America said we would: that in questioning dietary advice, we end up in “a place of disorientation about what dietary advice is”—a first step to redefining and reimagining it. Here’s what we accomplished in two weeks. I’d love to find out where we might end up if we spent an entire term on these topics…

Have you engaged critical nutrition studies with your students or in your work? I’d love to hear about and learn from your experiences!

More about my food studies teaching: