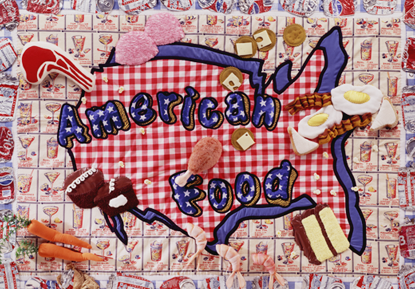 If you ever want to strike up a passionate food debate, just toss out the the question, “What is American food?” While you’ll hear the unenlightened decree with disdain that the United States has no food culture, the answer is far more nuanced.

Like jazz and blues music, some argue that barbecue is a unique American cultural food product, one that loudly communicates a multiethnic history and both local and regional identity. Others will insist that the food traditions of New England form the culinary roots of American cuisine.[1] Others will point to McDonalds and other fast food joints known for selling burgers and fries as quintessentially American in taste, presentation, and capitalistic expansionism.[2] Still others will argue that the continually simmering melting pot[3] of American citizens ensures that all food served within U.S. borders in some way represents, absorbs, and communicates American food culture. 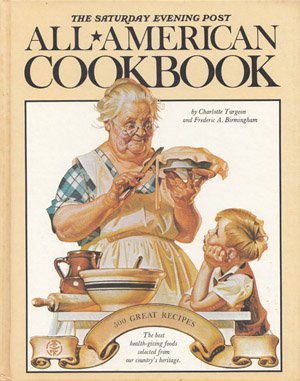 These disparate points of view are portrayed in different ways in The Saturday Evening Post All-American Cookbook.

Published in 1976, filled with reproductions of the Post’s covers and advertisements, and made up of 500 all-American recipes by food editor and author, Charlotte Turgeon, the cookbook commemorated not only the nation’s bicentennial, but also “every person who has played a part in the nation’s culinary heritage”  and country’s “magnificent” food (p. 6).

In his “Light-Hearted History of Eating in America,” which precedes the recipes, Frederic A. Birmingham, Managing Editor of The Saturday Evening Post, points to the innovation and flexibility of American cooks as they “adopted and adapted the traditional dishes of Europe to the miraculous plenty of their brave new world” (p. 7). In preparing and consuming this all-American food, Birmingham argues that American cuisine embodies the cultural value of freedom, unrestrained by “rigid traditionalism” and “rockbound food lore (p. 9), making space for uniquely American fare.

He also contends that “this country more than any other has been open and receptive to new knowledge in nutrition, diet, and, and scientific food preparation,” an inclination that he asserts “has contributed to our good health without decreasing our wealth of enjoyment at the dining table” (p. 9). Indeed, American openness to the certainty of science at the table, sometimes at the expense of tradition or art, has shaped the American diet and food culture.

Beyond scientific leanings, Birmingham promotes specific “American” ingredients as he boasts, “There is no steak like an American steak. We raise the best beef, cook it the best, and eat the most of it in many forms” (p. 11). While not at all his point, these seemingly contradictory sentiments reveal the underlying paradoxes and conflicts of eating in America: seemingly unrivaled plenty and abundance link arms with hearty appetites, rooted in the quest for freedom and innovation, only to butt up against nutrition, health, responsibility, and individualism. 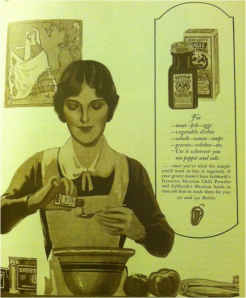 While a typical “We are #1!” sentiment can be detected, the cookbook’s authors contend that they do not make Mark Twain’s claim that “the only good food in the world is American food” (p. 12). But they do say that Americans can hold their heads up high as our culinary creations are “based on the American theory that food should be delicious as well as nutritious, well seasoned while not exotic, well prepared but not complicated” (p. 12).

Beyond this definition of American food theory, Birmingham roots American food culture firmly within “The First Thanksgiving” myth. He posits that the great desires, needs, sacrifice, and suffering of the seventeenth century pilgrims is what causes plenty and abundance to resonate so deeply within all American citizens, past and present. Because the people of the United States began with and have known great want—as pilgrims, as immigrants, as refugees, as any who sought a new life on American shores—Americans powerfully embrace, value, and seek freedom from want. Notably, such an argument ignores the food cultures and significant agricultural expertise of Native Americans, as well as the violent histories of conquest that the Thanksgiving myth obscures.

Birmingham concludes his introductory comments with the words of Carlos Bulosan, which accompanied Norman Rockwell’s “Freedom from Want” when it first appeared in The Saturday Evening Post:

We are not really free unless we use what we produce. So long as the fruit of our labor is denied us, so long will want manifest itself in a world of slaves. It is only when we have plenty to eat—plenty of everything—that we begin to understand what freedom means. To us, freedom is not an intangible thing. When we have enough to eat, then we are healthy enough to enjoy what we eat. Then we are not merely living but also becoming a creative part of life. It is only then that we become a growing part of democracy” (p. 22).

Despite some of its shortcomings, this cookbook provides fertile source material for exploring the connections between American values and ideologies and the way that they inform how, why, and what Americans eat; as well as how they define what “American” food is. 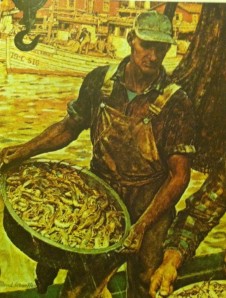 And last, but not least, sandwiched between reproductions of food-themed Post covers and period advertisements, among the cookbook’s 500 recipes are:

[1] For more, I recommend Stavely and Fitzgerald’s America’s Founding Food: The Story of New England Cooking.

[2] On this topic, I love Elizabeth Rozin’s The Primal Cheeseburger.

[3] Or ethnic stew or salad bowl if you prefer; for more, check out LeAna Gloor’s “From the Melting Pot to the Tossed Salad Metaphor: Why Coercive Assimilation Lacks the Flavors Americans Crave.”