Today I conclude my January 2013 blogging and this series of four posts, each covering sections from my paper, “Dunkin’ Donuts: A Site and Source of Bostonian Identity.” Here you can find posts one, two, and three.

In the global marketplace, Dunkin’ Donuts provides a unique case study of coffee consumption as an expression of identity, particularly in opposition to Starbucks, which has so powerfully shaped coffee culture worldwide. While the Dunkin’ Donuts coffee identity is uniquely salient in Boston and New England, the role and meaning of Dunkin’ Donuts also carries weight in other U.S. cities and in the international market, providing areas for further research. 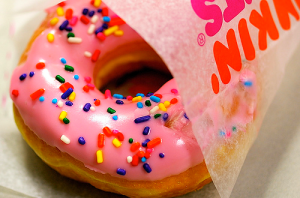 For example, a study that identified devout Dunkin’ Donuts and Starbucks drinkers as “tribes” was conducted in cities outside of New England, in Phoenix, Chicago, and Charlotte. While the specific reasons for brand loyalty may vary in each city, Dunkin’ Donuts marketing strategies target some of the same cultural components that they do in New England. For example, the Dunkin’ Donuts brand is repeatedly linked to sports mania wherever possible, sponsoring the Chicago Bulls, Indiana Pacers, Washington Wizards, and Charlotte Bobcats (NY Sports Journalism 2010) and in 2009 Dunkin’ Donuts was named the official coffee of the Dallas Cowboys and Dallas Stadium. While the local meaning of Dunkin’ Donuts likely varies in the United States from place to place, it consistently asserts a specific identity in opposition to that of Starbucks and is worthy of additional study.

Just as the relationship between brand and consumer identity varies across the United States, Dunkin’ Donuts has created a different identity in the international marketplace as well. For example, Dunkin’ Donuts currently operates 900 shops in South Korea alone (Dunkin’ Donuts Press Kit, 2012), offering standard menu options, as well as specialized items, including soy donuts and 12-grain lattes made with barley and brown rice (Jargon & Park 2009).

In such a way, Dunkin’ Donuts speaks to the globalization of food, revealing an example of a franchised global entity experienced as local practice that varies from place to place. What remains to be seen is if the local identity of Dunkin’ Donuts that resonates so powerfully in Boston can be transplanted and grown in new environments—or will it remain a New England phenomenon?