The iconic American housewife of the 1950s, June Cleaver.

How Americans cook and eat is only in part about food. Much more of the story is told by the contextual details of the time. For example, the postwar era of the 1950s, crystalized in the pop culture image of June Cleaver, was characterized by marked changes in American life: more women entered the workforce; the middle class grew; car and home ownership increased; and the food industry, centralized by World War II, sought a civilian market for processed foods. Because of the amalgamative effect of these factors, packaged-food cuisine, such as the can-opener cooking proffered by Poppy Cannon, became popular.

Following this decade of rapid consumerism and processed foods, a subset of Americans in the 1960s and 1970s — hippies! — viewed food in a reactionary way to those who came before them. Opposed to the high-speed and time-obsessed American lifestyle — not to mention panicked by war, conflict, and imminent ecological demise — the counterculture expressed their worldviews, like the 1950s generation before them, through food, adopting a distinctly anti-modern perspective. 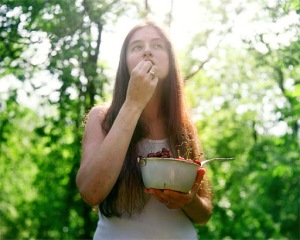 Hippies embraced their own food culture, the countercuisine, which embodied the principles and values of the movement.

Today’s food views build upon the undulating gastronomic torment of our past and again propose a vision for a bright and more prosperous future. As today’s American economy demands two income families to meet the pressures felt by a shrinking middle class with a limited social safety net, citizens again turn to food for answers. In today’s world, however, the trends of 1950s convenience and 1960s naturalness both exist as choices that woo consumers for different reasons. While neither option is more relevant than the other, they both provide options for American cooks and eaters. Furthermore, these ways of eating are not mutually exclusive nor are they chosen in a vacuum. The pressures of daily life may result in mostly convenience food products à la the 1950s, while the weekend may allow the slower pace to celebrate organic nature, from-scratch cooking, and gourmet gastronomic experiments.

Even in the young nation of the United States, today’s cooks and eaters draw from a diverse food history. Do women hate to cook? Should we grow our own food? Should we embrace brown foods and scorn white ones? Is home cooking important? These questions have resurfaced throughout history, and each time we must ponder their new meaning and form answers for our own time. The twentieth century legacies of both packaged-food cuisine and the countercuisine shape our current diets and will play a role in how we eat in the future.