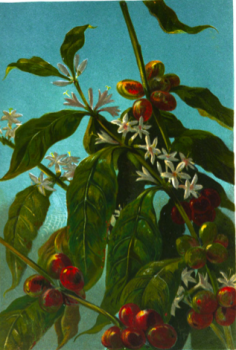 Since the seventeenth century, Americans have roasted, steamed, and boiled coffee, causing its gradual transformation into our national beverage and a potent patriotic symbol. In his 1872 text, Coffee: Its History, Cultivation, and Use, (read it for free on Google Books) Robert Hewitt Jr. captured the historical prominence of coffee in the United States, saying, “Since cotton has been proclaimed ‘king’ in the realm of commerce, coffee should be styled ‘queen’ among the beverages of domestic life” (Hewitt 1872: 11).

Coffee has since risen from its status of queen of the domestic realm and emerged as a leading global commodity, second only to petroleum oil (Pendergrast 1999: 1). Coffee thus exerts considerable political and economic power. The United States has led world coffee consumption for the past two hundred years (Tucker 2011:18). Coffee plays multiple social and cultural roles within American daily life as a beverage consumed upon waking, shared in social settings, enjoyed at the end of a meal, savored during the workday coffee break, and so on. In his historical text, Hewitt depicts coffee as a socially accepted stimulant that fuels and enlivens the mind, body, and spirit.

Hewitt traced coffee’s origins to Ethiopia where it had been consumed “from time immemorial” (1872: 16). He then dated coffee consumption in Persia to the fifteenth century. Sr. Henry Blount, who visited Turkey in 1634, described coffee as,

Made of a berry as big as a small bean, dried in a furnace, and beat to a powder of a sooty color, in taste a little bitterish, that they seethe and drink, hot as may be endured. It is good at all hours of the day, but especially at morning and evening, when to the purpose they entertain themselves two or three hours in cauphé-houses, which, in Turkey, abound more than Inns and ale-houses with us (quoted in Hewitt 1872: 23).

Hewitt cited coffee consumption as fashionable in both Paris and England around the mid-seventeenth century with coffee introduced in the United States a short while later (1872: 23; also Ellis 2008). For example, a Bostonian woman received the first license to sell coffee in 1670, and by 1690 there were at least two operating coffeehouses in Boston (Stavely and Fitzgerald 2004: 270).

Several converging factors influenced the transformation of coffee into American “necessity of life” (Hewitt 1872: 30) in the eighteenth and nineteenth centuries, the first of which had roots in New England.

Hewitt praised coffee’s caffeine kick, referring to coffee as “the magic drink” that “achieved an incalculable amount of good, in rendering people more happy… as well as more thoroughly equipped for encountering the battle of life” (1872:11). Hewitt even used poetic prose to describe one man’s early morning coffee experience at an outdoor stand in New Orleans:

Look at the recipient, who with blanched face, dull eyes, and depressed mien, reaches out his hand and seizes upon the nectar. The moment the fragrance reaches his nostrils a transformation for the better commences, the eyes grow bright, a healthful color and natural fullness returns to the cheeks, smiles wreath the mouth, the mind becomes active, the fogs, the dark air, effluvia of all sorts are exorcised like ghosts fleeing before the penetrating rays of the unobstructed sun (1872: 30).

Here Hewitt portrays coffee as a savior that awakens the consumer, bestowing energy and clarity. Hewitt likens the awakening power of coffee to the sun, making coffee the center of the universe, a source of life and power like the sunrays required for photosynthesis and the survival of all plant life on earth.

Hewitt also posited coffee as an acceptable stimulant, unlike alcohol and tobacco. He argued that coffee ought to be considered “an auxiliary to temperance” (1872: 41), as coffee was “an exhilarating drink, possessing the good qualities of wine without any of its bad consequences” (1872: 75). 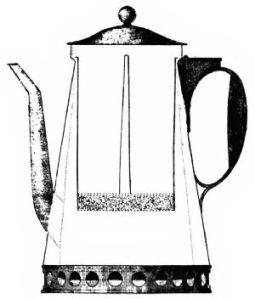 Preparing coffee was a laborious and complex process until the twentieth century (Stavely and Fitzgerald 2004: 272). In Coffee Culture, Tucker quips that if coffee had not promised the enlivening effects of caffeine, it is unlikely that people would have pursued the multistep process of preparing it (2011: 6). Indeed, Hewitt admitted that making good coffee was considered a problem that “Yankee ingenuity has not been idle in trying to solve,” noting that the United States Patent Office had issued 175 patents for coffeepots alone (1872: 78). Hewitt recommended using Count Rumford’s percolator.

Making fresh coffee in nineteenth-century New England required a fair amount of work and number of kitchen gadgets; one had to:

The main ingredient in a cup of coffee is the bean itself. Coffee berries grow best in warm climates at high elevations. Then and now, coffee is a tropical commodity that is grown in a variety of locations near the equator. Very often in high demand, coffee’s production was and is similar to that of sugar, rum, and other tropical commodities, each rife with political and economic conflict, as well as affronts to social and environmental justice. Although such issues were not a key focus in Hewitt’s text, he did express concern that coffee bean production was supported by forced labor conditions that were worse than those of American slavery (1872: 58).

Notable, however, is Hewitt’s repeated reference to coffee as “the fragrant berry,” revealing a more intimate knowledge of the bean’s origin. Typically commodity fetishism manifests in dissociation between the commodity and the consumer’s knowledge of its production. From Hewitt’s descriptions however, it appears that this knowledge remains intact, at least among those interested in coffee.

Although its health effects have been contested within the medical community for hundreds of years, coffee in the United States began as and remains a socially acceptable drug that fuels labor, intellectual thought, and creativity.

Catherine Tucker pondered the role of coffee as fuel in her work, Coffee Culture. She described a frantic morning when she was running late to teach one of her classes at Indiana University, but needed to stop for a quick cup of coffee. Her search for a coffee shop without long lines proved difficult and in considering the situation, she mused, “Going by the number of busy coffee shops, someone might think that the campus runs on coffee. Maybe it’s true” (2011: 18). Dunkin’ Donuts’ most recent marketing slogan, “America Runs on Dunkin,’” also builds upon this construct of coffee as a potent fuel that runs humans like machines, just as gasoline runs automobiles. Robert Hewitt Jr.’s nineteenth-century text reveals not only historical evidence for the concept of coffee as fuel, but also demonstrates the command coffee has had over Americans for centuries.