So declared Barbara Ketcham Wheaton, an eighty-five-year-old expert of culinary history and databases with a literal twinkle in her eye. Since 2009, she has taught the Reading Historic Cookbooks: A Structured Approach seminar at the Schlesinger Library in the Radcliffe Institute at Harvard University—a women’s and food history treasure whose collection includes 25,000 cookbooks, 4,500 culinary pamphlets, and the papers of famed food figures like Julia Child, Elizabeth David, and M.F.K. Fisher.

I had the pleasure to spend last week there with Barbara Ketcham Wheaton and a baker’s dozen of seminar participants from around the world: professors, graduate students, bakers, historians, and cookbook enthusiasts. Together, we studied digital copies of hundreds of cookbooks from the 1390s to the 1920s from England and the United States, geographies limited only to keep the language requirements of the seminar accessible.

Cookbooks speak of more than what people ate or how they cooked in a particular time and place. Even as we began studying at the micro-level of ingredients, Wheaton remarked, “We’re looking at small details, but they tell big stories.”

Cookbooks tell us about joy and sorrow, feasting and fasting, the quotidian and the spectacular. These are stories of nature and humanity, seasonality, locality, and geography; of trade routes and global relationships. These are histories and transformations of religion, philosophy, medicine, and technology; of literature and literacy, markets and marketing.

Cookbooks also reveal much about identities and politics, such as the role and rights of women. During the early centuries of cookbooks, these texts were written by men and for men, most often the managers of court and estate kitchens, not for cooks themselves and certainly not housewives. The audience, tone, style, and content of cookbooks changed over time.

A small selection of the English and American cookbooks from 1390s-1920s studied during the seminar.

From reviewing her massive corpus of digitized cookbooks, Wheaton estimates that the first cookbook published by a woman was in 1596 in Germany—home to the printing press and a Protestant country where literacy was promoted more democratically than throughout Catholic Europe. As a result of these dynamics, cookbooks published by women would not appear in Spain or Italy until later. In England, Hannah Woolley started publishing cookbooks in the 1660s. Female-published cookbooks wouldn’t appear in France until the 1820s. Compared to these histories, women in what would become the United States were recognized as literate cookbook authors and readers from the beginnings of European settlement.

Acknowledging their vital position in history writ large and long, how does one read a historic cookbook?

Having conducted culinary research for more than fifty years, Barbara Ketcham Wheaton developed her “structured approach” when researching her book, Savoring the Past: The French Kitchen and Table from 1300 to 1789 (University of Pennsylvania Press, 1983) and in her efforts to develop a comprehensive database of cookbooks from around the globe. For her, a structured approach is about teasing apart the strands within a cookbook and developing a process of classification so one can see the whole, rather than just lists of ingredients and techniques.

Within the scope of the seminar, Wheaton broke down a cookbook, spending a day each on:

We mostly read from digital copies, but were lucky to view a few texts, shared with the seminar by Tom Nealon. Photos: Emily Contois

When we considered the kitchen, we catalogued everything in it. Drawing from details in our cookbooks, we pieced together the kitchen’s size, location, and organization, as well as its equipment, appliances, tools, and furnishings, taking note of their materials like cast iron, copper, wood, tin, aluminum, linen, and paper. We paid attention to what fuel sources were used and how a cook attended to cooking temperatures and times.

While teasing out these details usually requires closely reading a cookbook line by line, page by page, Alexis Soyer’s The Modern Housewife or Ménagère, published in London in 1851, clearly listed in great detail a perhaps aspirational (and decidedly promotional) batterie de cuisine: 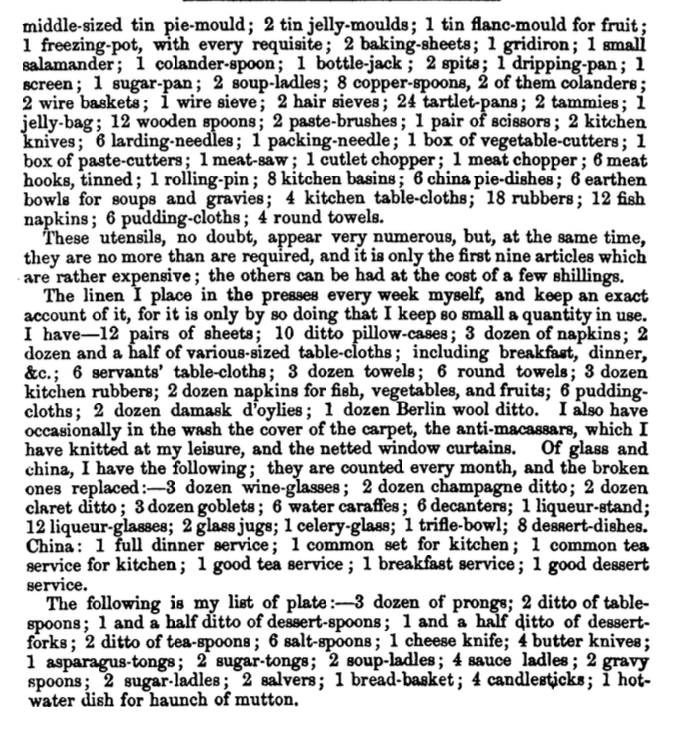 The batterie de cuisine outlined in The Modern Housewife, 1851

A master promoter whose previous book, The Gastronomic Regenerator had sold more than 15,000 copies, Soyer also used The Modern Housewife to advertise Soyer’s Modern Housewife’s Kitchen Apparatus, describing it as the central instrument in a well-outfitted kitchen. 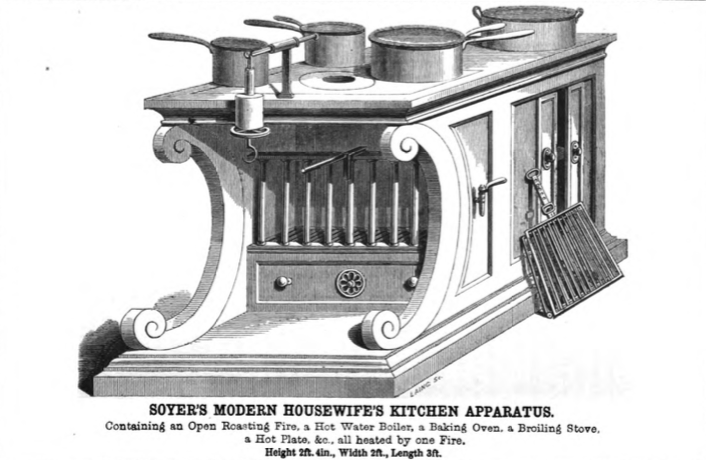 Moving on from kitchens, we read cookbooks that devised menus and meals. We considered examples for how to live on very little (such as Lydia Maria Child’s The American Frugal Housewife, 1835, 16th edition), as well as how to spend it all and eat lavishly, like the menu of a feast for Richard II in 1387 that called for 1,100 eggs, as well as the slaughter and preparation of 2,500 live animals.

As we analyzed cookbooks as objects of publication, we examined their size, shape, design, paper, and processes for printing and binding, transport and sale. We were fortunate to have Tom Nealon of Pazzo Books (and author of Food Fights and Culture Wars) among the seminar participants, who let us touch, smell, and generally fawn over several rare cookbooks. Lastly, we pondered cookbooks as social and cultural documents, ones that link “the writer, reader, cook, and eater.” Wheaton encouraged us to explore: Who wrote cookbooks, why, and for whom? Who published and sold cookbooks, and at what cost? Who owned these cookbooks, and what would it have been like to cook from them?

While our approach to studying cookbooks was well structured, the seminar itself also included a lovely amount of unstructured time, a week spent around a table with a group of experts, available to answer any number of questions like: What is a bustard? (A big bird, sort of like a turkey.) A pippin? (A type of apple). Or a breame? (A freshwater fish.)

Especially with such unfamiliar ingredient and dishes, Wheaton reminded us that recipes, such as those from the fifteenth century, were not written for us and must be judged on their own terms. Reading for silences is also an important task, as what is left out in a cookbook often reveals details that were so commonly known they needn’t be recorded. At the same time, reading historic cookbooks results in many presentist giggles over apple-less apple pies, cakes that call for thirty eggs and fifteen egg whites, batters to be vigorously beaten for two or three hours (#armsofsteel), and vegetables to be boiled for a full hour, if they’re included on the menu at all.

While historic cookbooks contain some recipes we’d rather not cook and taste, there are many recipes that have stood the test of time or deserve to be revived. I’m quite tempted to try this recipe for Fairy Butter from Mrs. Frazer’s The Practice of Cookery, Pastry, Pickling, Preserving, etc., Edinburgh, 1795:

Or this one for pop corn in Cookery As It Should Be, Philadelphia, 1856, which calls for seville orange juice:

All in all, the way I’ll treat cookbooks in my research and teaching has been forever enriched. I wholeheartedly encourage others to apply for the seminar should it be offered in future years.

An incredible week at #readingcookbooks17! So lucky to study with Barbara Wheaton, as sharp & knowledgeable at 85 as I'd ever dream to be. pic.twitter.com/JvQJtP5H4I

For more cookbooks, recipes, photos, and general commentary on the Reading Historic Cookbooks seminar, check out #readingcookbooks17 on Twitter.