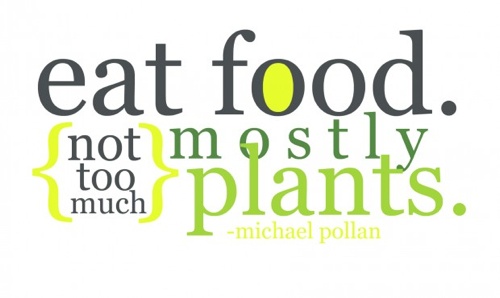 On March 8, 2013, I had the pleasure of attending the Critical Nutrition Symposium at UC Santa Cruz, organized by Julie Guthman, author of Weighing In. The event was spawned from a roundtable discussion at last year’s Association for the Study of Food and Society conference. The symposium brought together an interdisciplinary group of scholars to critically examine what is missing from conventional nutrition science research and practice, discuss why it matters, and brainstorm how to move forward in an informed and balanced way. What follows are a few of my favorite key ideas from the day’s discussions. 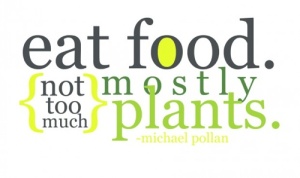 The seven word call to action that Pollan endorsed in “In Defense of Food.”

Adele Hite, a registered dietitian and public health advocate who is not afraid to ask big and delightfully confrontational questions regarding nutrition science, began the day by dissecting Michael Pollan’s now famous aphorism—Eat food. Not too much. Mostly plants. Step by step, she revealed the decades of revisionist myth and shaky science on which the diet most often considered healthy (one that is plant-based) is built. For example, she argued that the recommendation to eat like our grandparents is not particularly well founded, as nearly two-thirds of the average diet in 1955 came from foods that dietitians often encourage eaters to avoid, such as meat and full-fat dairy products. She claimed that these animal foods have been much maligned, but without significant scientific certainty of their harm. To illustrate her point, she cited the 2011 Cochrane Review, which she argues found no clear effect between dietary fat interventions compared to control diets on heart disease risk.

Among many other salient points, Hite stated that questioning the premise of energy balance elicits “a Galilean response” from nutrition scientists. Despite growing evidence that obesity is about far more than calories-in-and-calories-out, nutrition today continues to believe that the world is flat. To extend such metaphors, Hannah Landecker in her critical thoughts on nutrition science cited the anthropocentrism of the discipline, an orientation not unlike past beliefs that the earth was the center of the universe.

Landecker also made the interesting argument that nutrition is joyless as a science in that it typically views food and health in a narrow and restrictive way. Landecker finds joy in the study of metabolism, viewing it as an exciting and mind-bending exploration of the space between the food and the body. In such a way, it effectively studies the “how” of eating, while nutrition tends to remain focused on the “what.” In her comments, Nancy Chen agreed, describing nutrition as similar to economics; that is as a discipline focused on knowledge production. Grounded in her own anthropological perspective, Chen also noted the absence of cultural knowledge and frameworks in both nutrition and metabolic science. 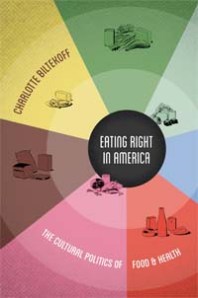 In the next panel of speakers, Jessica Mudry, author of Measured Meals, argued that a “discourse of quantification” reigns supreme in nutrition, which privileges the formalized knowledge of nutrition over knowledge of the body itself. Within this frame, the conceptual calorie becomes the way in which we know food and how it communicates with and influences bodies. Extending notions of the calorie to dietary ideals more broadly, Charlotte Biltekoff argued that dietary advice embodies social and cultural values, as it constructs a moralized class hierarchy. Within this frame, ill health and poor eating habits carry increased moral and social significance. In her forthcoming book, Eating Right in America: The Cultural Politics of Food and Health, Biltekoff traces four movements—the domestic science movement, the WWII national nutrition program, the alternative food movement, and the anti-obesity movement—demonstrating how across more than a century, dietary advice has not only sought to reform diets, but also to craft ideal citizens.

In the final panel, Aya Kimura shared the findings presented in her book, Hidden Hunger: Gender and the Politics of Smarter Foods. She argued that “charismatic nutrients” capture attention and thus come to embody a particular food problem, providing a reductionist nutritional fix that ignores the social and cultural problems at the root of food issues. In this way, international food aid often bypasses the poor, particularly women, reducing food problems to nutrition problems. This reductionism misses many pieces of a more complex puzzle and promotes the power of industry and food scientists rather than local communities. 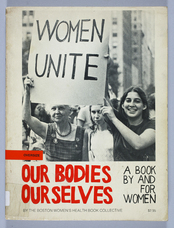 “Our Bodies Ourselves” was a women’s health and sexuality book, written by women for women.

Jessica Hayes-Conroy also brought gender and power to the fore in her discussion of critical nutrition, arguing that the community-building and empowerment focus of protocol feminism, as put into action by Our Bodies Ourselves (1970), could be effectively applied to nutrition science.

As a “new” science, the story of nutrition is still being written, but much of the narrative is dominated by basic themes of human nature: the desires to create order from chaos and to seek the comfort of certainty. In this way, the first Dietary Guidelines for Americans in 1977 form the twentieth century legacy of nutrition science, which sought to assert authoritative knowledge even when it did not yet fully exist. While digging deeper quickly makes one very seriously confused on how best to eat and think about food, Hannah Landecker offers some ironic, but seemingly perfect advice:

Everything in moderation—and with a grain of salt.