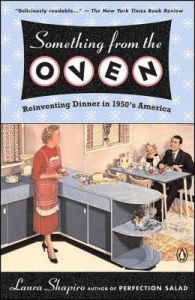 Laura Shapiro’s Something from the Oven (2004)

Telling the story of how the food industry won over (albeit not immediately) the hearts and kitchens of America’s housewives, Laura Shapiro‘s Something from the Oven: Reinventing Dinner in 1950s America (2004) is hands down one of my favorite food history texts. I very truly geeked out when she signed my copy at the Siting Julia symposium in 2012. As “deliciously readable” as The New York Times Book Review claims it to be, this delightful book demonstrates how in the years following World War II, the food industry, women’s magazines, and the press alike attempted to sell housewives on convenience food products, emphasizing the technological wonderment and time saving attributes of frozen vegetables, canned meats, and complete frozen meals. I got a taste of this myself when I was researching the marketing of Kraft food products in the archives at the Hartman Center at Duke University last month. But first, let’s talk a little history.

Despite the industry’s best efforts, food technology at first failed to capture housewives’ hearts or stomachs. Women who had utilized processed foods during wartime rationing did not desire to do so when fresh foods were available and affordable. Furthermore, women were “deeply suspicious” of convenience foods (44). Even more problematic for the food industry, convenience foods lacked prestige (20), were not viewed as food, and serving them was even considered cause for shame (55). While children may be fed on occasion that icon of American culture, the TV dinner, packaged foods were not considered an appropriate substitute for a family meal and certainly not suitable for guests. This negative view of convenience food was also a direct result of women’s sense of moral, emotional, and societal responsibility to cook, a deep-seated responsibility that was not fulfilled by shortcut cooking (52).

Women’s desire and responsibility to cook was particularly powerful during the 1950s. Following the strains of the Depression and World War II, decades of struggle and want, the 1950s ushered in a time of relative prosperity that Shapiro terms “a genuine good-food era in American life” (26-7). Food, meaningful in any time, became the glue that reattached families, helping them to grow, to forget a painful past and move forward into a new, prosperous future. Women were not only responsible for cooking tasks as they had been in the past, but were also charged with the weighted mission to do their part to usher in a new American life. While much of Europe lay in ruin—so the postwar American narrative goes—the US economy boomed and hopes for a prosperous future materialized for many American families. Increasing incomes and a growing middle class resulted in increasing car and home ownership, often in suburbs, which reshaped the American landscape and consciousness, strongly influenced by consumerist and materialist aims. As affluence increased, however, so did class anxiety. Food, cooking, kitchens, and dining rooms became powerful markers of social status.

It was in this climate that the convenience food industry was able to reinvent itself from suspicious and shameful to aspirational, conspicuous consumption. Following the food industry’s lead—or the advice of Poppy Cannon and her Can-Opener Cookbook (1953)—housewives added to and “doctored up” packaged foods, making them acceptable to the palette and for the dinner table. This evolved into “glamorizing” (65), framed by the industry as easy haute cuisine. The industry gained a foothold, however, when it stopped selling individual convenience products and instead marketed a new cuisine—“packaged-food cuisine” (56)—and a lifestyle to go along with it. Packaged-food cuisine elevated the status of convenience foods, transforming them into “party foods” (65), meaningful to families competing for social status in a society of increasing abundance. An amalgamation of the somewhat manufactured values of fun, effortless labor, and sophisticated luxury, packaged-food cuisine represented a triumph for the food industry.

I had this history in my head when I went into the advertising archives last month, but nothing prepared me for how thrilling, vexing, hilarious, and intriguing it would be to run across a slew of domestic Kraft advertisements for products like Velveeta and Cheez Whiz, which brought Shapiro’s text to life in full color. I hope you enjoy this little snack as much as I did.

This 1962 advertisement for Velveeta features recipes for “everything from thrifty main dish sandwiches to gala party ideas!” May I interest you in a “Hawaiian sandwich:” a toasted bun slathered with peanut butter, then covered with a well-drained slice of pineapple, only to be topped with a slice of Velveeta, and punctuated with a maraschino cherry.

Among these nine thrifty Velveeta main dishes perfect for Lent are “‘glamorous’ and good for the family Velveeta pizzas,” marketed as a “traditional Italian-style dish that has become so popular all over the country.” [An aside to children of the ’90s: Are these not the precursor for Bagel Bites, the infamous snack of latchkey kids? “When pizza’s on a bagel, you can eat pizza anytime!!“] 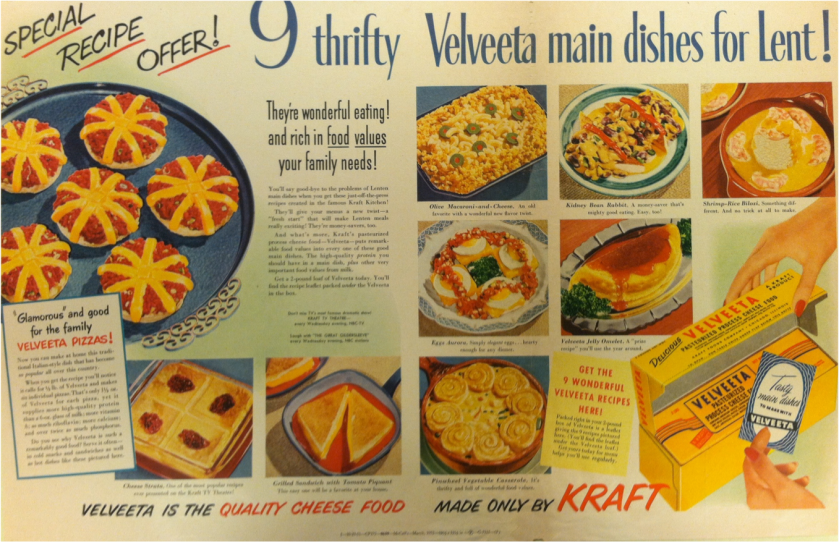 This 1953 advertisement for Kraft’s Cheez Whiz markets the cheese-esque product as “elegant,” “perfect for party dishes,” and “grand for glamorizing vegetables,” like the cauliflower pictured below, encircled by a bevy of sliced tomato beauties. Or perhaps you’d prefer the “Rice Timbales,” prepared by packing hot cooked rice into greased custard cups, unmolding the rice, and serving with “rich, hot Cheez Whiz.”