Nancy Meyers’ older bird chick flicks, Something’s Gotta Give (2003) and It’s Complicated (2009), provide both escape and hope to middle-aged female audiences, whose views on love, sex, and relationships are both informed and complicated by life experience — including marriage, motherhood, and divorce — and the stereotypes that accompany being middle-aged. 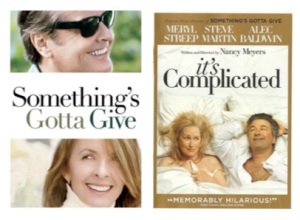 Something’s Gotta Give is the story of fifty-three-year-old Erica (Diane Keaton), the successful, divorced playwright who in the setting of her luxurious Hampton beach house falls in love with both her daughter’s sixty-three year old boyfriend, Harry (Jack Nicholson) and a handsome thirty-something doctor, Julian, (Keanu Reeves). It’s Complicated also tells the story of an accomplished, divorced woman in her fifties, Jane (Meryl Streep), but in this version of the story, she is caught not between a man her own age and a younger man, but between her ex-husband, Jake (Alec Baldwin), and her new boyfriend, Adam (Steve Martin), the architect she has hired to build her dream home.

Food and cooking serve as symbols and narrative devices in these two films, representing and communicating the multidimensional nature of middle-aged women in not only the traditionally feminine roles of mother and housewife, but also the pro-feminist roles of career woman and lover. These different roles need not be in conflict within Meyer’s leading women, however. The older bird genre tells stories of sexual reawakening, a process that thus shifts the balance and requires ongoing negotiation of the self within the characters’ heretofore established identities.

In a delightfully palatable twist, this process is played out through the sub-text of food. In scene after scene, food, cooking, eating, feeding, and food-centered settings progress each film’s narrative and provide depth to the exploration of middle-aged female identity. Kitchens in particular serve as both symbols of identity transformation and meaningful settings for significant narrative action, specifically as spaces for romantic relationships to progress. The kitchen in each film personifies the female lead, transcends the screen to capture the aspirational hearts of viewers — and the professional eye of designers and bloggers — and finally, embodies Meyers own life experience and trademark visual style.

When surveying sets for Something’s Gotta Give, Meyers noted that homes in the Hamptons all featured “blowout kitchens” — large kitchens equipped with commercial appliances, custom cabinetry, granite countertops, and other high-end, expensive features. Thus, Erica’s magnificent kitchen is realistic for her character. Beyond fact-checking realism, however, Meyers also says, “The house had to reflect Diane’s character, who is a very successful, accomplished New York playwright in her mid-50s” (Collins 2003). Meyers describes the kitchen itself, saying, “It was a cook’s kitchen, a bountiful kitchen” (Green and Baldwin 2006) and “a little too big” (Collins 2003).

Kitchen from “Something’s Gotta Give”

Just as Meyers herself finished her dream home following her divorce from Charles Shyer, Meyers outfits both Erica in Something’s Gotta Give and Jane in It’s Complicated with their own “blowout kitchens” that serve as self-gifts for achieving professional success and surviving divorce. In addition, while some individuals furnish lavish kitchens for show, both Erica and Jane love to cook, making the kitchen a space where what is a domestic chore for some women, is elevated as a hobby and creative endeavor for Erica and Jane. 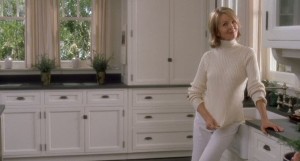 Diane Keaton stars as Erica in “Something’s Gotta Give,” a woman of a certain age, whose sexual repression is symbolized by her wardrobe, often confining turtlenecks and unadventurous whites.

Beyond markers of status and functional spaces for cooking, Scott Rudin, a producer of It’s Complicated, suggests that Meyers’ sets also reveal meaning and further develop characters. He says, “Everything — the silverware, the food in the fridge — is part of the narrative” (quoted in Merkin 2009). Indeed, Meyers represents and negotiates character identity within kitchen spaces. For example, while Erica’s preference for all white clothing and white stones are construed as part of her controlling personality, her gleaming white kitchen bursting with sunlight is an ideal representation of who she is. As she negotiates her newfound sexual self, she is always comfortable and in control within her kitchen.

Rudin also discusses the set design for It’s Complicated, saying, “We had a lot of conversation about the size of Jane’s house. Her bedroom is a small bedroom and her kitchen is a small kitchen that’s falling apart. She’s saved for 10 years to change it. Nancy’s worked hard to [create a kitchen that would] justify the plot” (Merkin 2009). Jane takes a longer road than Erica to establish her identity and develop self-worth after her divorce. This state of prolonged negotiation and struggle is personified in her “small kitchen that’s falling apart.”

These two set kitchens not only progress the narrative and support character development, but also provide fecund fodder for design enthusiasts and aspirational viewers. The kitchens in both films garnered significant attention from viewers, home décor magazines, blogs, and designers alike. The attention garnered by the It’s Complicated kitchen reveals that Meyers may have missed the mark creating Jane’s “before kitchen,” which many viewers actually enjoy and aspired to as it appears. For example, the design website, Remodelista, highlighted the kitchen in its “Steal This Look” feature, applauding it for its attention to detail. Following the blog entry are 122 comments that have been posted since it was published on December 22, 2009 that share a desire to copy the look and feel of Jane’s kitchen, which Meyers tries to portray as too small and requiring renovation.

While some viewers desired Jane’s “before” kitchen, the gleaming white English Colonial kitchen in Something’s Gotta Give all but revolutionized kitchen design. The Fran Jacoberger blog describes it as, “flooded with milky white hues, soft finishes and subtle detailing, its clean design packs universal appeal.” Erica’s kitchen is called the “most copied kitchen of all time” (Killam 2010) and Lee J. Stahl, president of the Renovated Home, a design-and-build company serving Manhattan’s most posh ZIP codes, confirms, “It’s the No. 1 requested style” (quoted in Green and Baldwin 2006). “Julia” the blogger responsible for Hooked on Houses, agrees, saying, “I copied as much of it as I could! I later found out I wasn’t the only one inspired by it. Every home show I went to the following year seemed to have its own version of this look.”

The set home, including the kitchen, was even featured in an issue of Architectural Digest, after which the set’s kitchen became one of the most searched features on ArchitecturalDigest.com (Friends of the Kitchen…). Meyers claims to have been annoyed by this set-centric press, saying,

It got to the point where I started to resent the whole house. It seemed like people were giving it more attention than the movie (quoted in Green and Baldwin, 2006).

And this is indeed part of the fantasy that Meyers creates within the older bird chick flick genre in which she is building a monopoly. Meyers creates not only romantic fantasies, but also magazine-worthy dream homes in which these fantasies unfurl. Even Harry utters, “Wow, it’s the perfect beach house,” when he first arrives at Erica’s home in Something’s Gotta Give. Merkin’s word choice is interesting, however, as she attempts to pin point what it is about Meyers’ films that appeal to “older bird” audiences, saying,

But in the end she’s dipping deep into the bourgeois mainstream, with its longing for Oprah-like ‘closure,’ its peculiarly American belief in personality makeovers and its abiding love for granite kitchen counters (2009).

The symbol of the trophy kitchen and the luxe life that Meyers incorporates into her films are certainly part of the equation.

As Meyers creates fantasies in which older women have it all — including career, family, financial success, love, and sexual fulfillment — this state of fantastical bliss is manifested within the film sets, particularly within the kitchens, which her viewers love as much, if not more so, than the films themselves. With so much emphasis placed on the kitchens, these two films function as food films where food is far more than a prop, but rather an element of characterization, plot development, and social critique. Through food — and juxtaposed with food — socio-cultural beliefs about middle-aged love and sexuality are explored in new ways. While Nancy Meyers’ packaging of middle-aged love includes considerable fantasy, it also reveals and affirms the very real conditions, desires, and hopes of a growing demographic of American women. As foodie culture and food films also continue to garner increasing attention, food-centered narratives provide unique sub-text to explore the multidimensionality of women of a certain age. 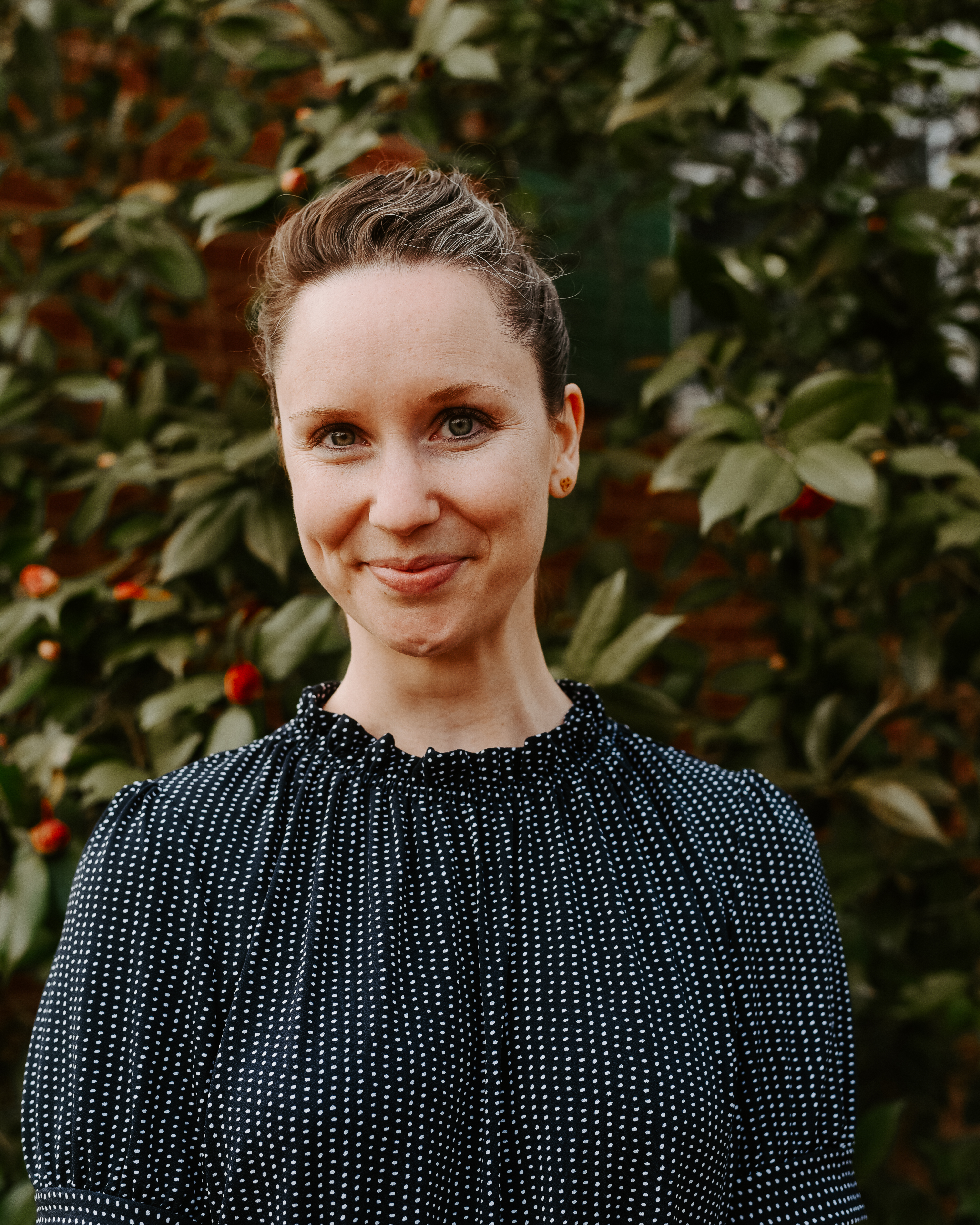 Welcome to my site. Please click around to learn more about me and my work.